List of Drugs for Immunotherapy at My Canadian Pharmacy

One of the mechanisms allowing the development and survival of cancer cells is an escape from effective immunosurveillance, that is, the recognition and elimination of tumor cells by the patient’s immune system. For this reason, several therapeutic strategies are being explored in order to restore this capacity for an immunological response.

Several classes of anticancer drugs with different mechanisms of action can be considered as immunomodulators. My Canadian Pharmacy experts note that immunotherapy uses the natural defense mechanisms of the body or the control of cell proliferation. Active immunotherapy can be specific (tumor vaccines) or non-specific (cytokines, various immunomodulators) or passive (monoclonal antibodies, for example cetuximab or bevacizumab, cytotoxic immune cells). Another avenue consists in removing molecular ‘brakes’ put in place by tumor cells and preventing the activation of the immune defense system.

The body has protective mechanisms that prevent cells of the immune system (especially cytotoxic T cells) from attacking their own tissues. Among these inhibitory control mechanisms is the expression on the surface of immune cells of certain proteins such as CTLA-4 (Cytotoxic T Lymphocyte – Associated protein 4) or PD-1 (Programmed cell death protein 1). In addition to lymphocytes and dendritic cells, these molecules are expressed by certain tumor cells. As they are capable of guiding the response of the immune cells either towards an effective response eliminating the tumor cells or towards a “non-response” allowing the development of the tumor, these molecules are considered “immune checkpoints”. While CTLA4 is involved in the early phase of the immune response, PD-1 plays a major role in the later effector phase. 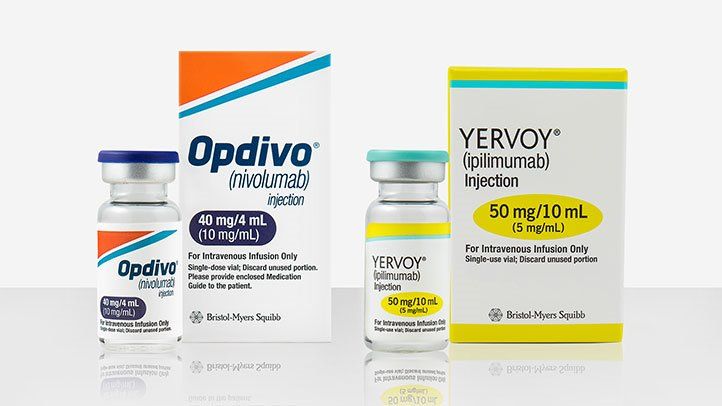 CTLA-4 is expressed constitutively in T lymphocytes, but only expressed on the surface of cytotoxic T cells (CD8 +) activated after engagement of their TCR receptor and its co-stimulator CD28. Normally, an antigen presenting cell will activate the T cell by binding both TCR and CD28. CTLA4 acts as an ‘off’ switch for this system by competing with CD28 to recognize the stimulatory molecules carried by target cells (CD80, CD86), and then triggering an inhibitory signal leading to a stop of proliferation and activation of T lymphocytes. The blocking of CTLA4 therefore leads to removing this brake and allowing the T cells to proliferate and activate when they meet a dendritic cell presenting tumor antigen within a ganglion. Once activated, these T cells will circulate in search of tumor cells carrying the antigen presented by the dendritic cell.

The PD-1 trans-membrane receptor (also known as Cluster of Differentiation 279) plays a major role in inhibiting the immune response and promoting self-tolerance through a dual mechanism promoting apoptosis (cell death programmed) in antigen-specific T cells in the lymph nodes while simultaneously reducing the apoptosis of regulatory T cells (suppressive anti-inflammatory T cells). PD-1 also inhibits the function of T lymphocytes by extinguishing the activating signal induced by the activation of TCR (via phosphatase SHP2 which will de-phosphorylate proteins activated by the TCR pathway). PD-1 is therefore an immune checkpoint which protects against autoimmunity and which is diverted by tumor cells. The two PD-1 ligands are PD-L1 (also known as CD274 or B7-H1) expressed by many cells when exposed to inflammatory cytokines, and PD-L2 expressed mainly by cell presenting cells’ antigens. In a tumor microenvironment, the expression of PD-L1 is increased by inflammation allowing tumor cells to inhibit the cytotoxic antitumor response of T lymphocytes.

As a result, blocking interactions between CTLA-4 or PD-1 and their ligands allows cells of the immune system to recognize and react against cancer cells. This is the principle of immunotherapy treatments based on the blocking of immunological checkpoints.

Interferon alpha and interleukin 2 (IL-2) are cytokines (proteins synthesized by immune cells under the influence of inflammatory stimulus and regulating the activity of the immune system) immunostimulants. These two proteins synthesized naturally in organism in the event of viral infection in particular are now obtained by genetic engineering in the form of human recombinant proteins used as agonist drugs for their respective receptors. IL-2 mainly induces the proliferation and differentiation of cytotoxic T lymphocytes. The interferon used in anti-cancer treatment is interferon alpha, 2A or 2B, which not only has an immunostimulatory effect, but also a direct toxic and anti-proliferative effect against tumor cells.

CTLA-4 inhibitors (Ipilimumab), PD-1 inhibitors (Pembrolizumab) as well as PD-L1 ligand inhibitors (Nivolumab and Atezolizumab) are all monoclonal antibodies that will lift the inhibition on T lymphocytes by preventing ligand-receptor interaction. They are grouped together under the term of immune checkpoint inhibitors. The result is therefore an activation of lymphocytes that will attack tumor cells, hence a therapeutic effect.

The immunomodulators of the IMiD family, thalidomide and its derivatives lenalidomide and pomalidomide, have antiangiogenic effects, a direct anti-tumor effect, interaction with the spinal microenvironment and an immunomodulatory action. The action of lenalidomide and pomalidomide is synergistic with that of dexamethasone. They are mainly used in hematological neoplasias (myeloma, myelodysplastic syndromes). Lenalodomide has the distinction of being remarkably active in the subtype of myelodysplastic syndromes with a deletion of chromosome 5q.

Interferon alpha 2A, alpha 2B and interleukin 2: these recombinant proteins have the same mechanisms of action and properties as their natural counterparts. They play an important role in immunostimulation for the expansion and activation of T lymphocytes.

Corticosteroids (glucocorticoids) use different mechanisms in different types of cancer and different targets to promote or inhibit tumor progression, and are useful treatments, in combination in particular in many anti-cancer treatment protocols.

Thalidomide is indicated, in combination with melphalan and prednisone (MPT protocol), for the first-line treatment of patients over 65 years of age with untreated multiple myeloma or with a contraindication to high-dose chemotherapy.

Pomalidomide is indicated for use in combination with dexamethasone in the treatment of relapsed and refractory multiple myeloma in adult patients who have previously received at least two prior treatments including lenalidomide and bortezomib and whose disease has progressed during the last treatment.

Precautions for Use: Thalidomide, Lenalidomide and Pomalidomide

Thalidomide is a known human teratogen causing severe, potentially lethal birth defects in an unborn child. This drug, as well as its two derivatives, should therefore be prescribed as part of a pregnancy prevention program, unless you can say with certainty that a patient is unable to procreate.

For women of childbearing age, the prescribing physician should ensure that:

Likewise, all men treated with these drugs must be informed and have understood the teratogenic risks expected in the event of sexual intercourse with a pregnant woman or of childbearing age.

Women likely to procreate must have effective contraception, the prescription is limited to 1 month of treatment. A pregnancy test must be performed within 3 days (for thalidomide) or 7 days (lenalidomide, pomalidomide) before the prescription, then once a month.

Major adverse effects with this drug class consist of immunological events. Their pathophysiological mechanism is not fully understood, but it seems likely that they are linked to the lifting of the inhibitory role of the immunity of these molecules. These immunological undesirable effects can touch all the organs, in particular with colitis, hypophisites, thyroidites, pneumopathies, vitiligo, rather they occur at the start of treatment, but can be seen at any time. Their treatment has not been formally validated in clinical studies, but immunosuppressants are generally used, in particular glucocorticoids as first line. Anti-TNF or mycophenolate mofetil are sometimes necessary. Importantly, it is possible, if indicated, to resume treatment with another class of inhibitor (for example an anti-PD-L1 after immunological toxicity of anti-CTLA4) without necessarily seeing an immunological toxicity reappear.